Giant pandas are active in the region but have not been spotted within the Jiuzhai Valley boundaries for a number of years. One reason for this is a result of the flowering of Jiuzhai Valley’s bamboo during the 1980’s. Once bamboo flowers it almost inevitably dies and can take from 12 – 22 years to re-grow. The result of this was a loss of the panda’s food source so it was necessary for them to move on to pastures new. In 2011 a lot of signs of panda activity, including droppings and feeding grounds, were spotted just outside of the national park boundaries. As the bamboo within the national park continues to re-grow it is hoped the panda will continue to thrive in the region.

223 species of bird have been recorded in Jiuzhai Valley National Park. These include the lesser kestrel, Chinese grouse, Sichuan Jay, snowy creek laughing thrush, rufus-headed robin and a sub species of Tengmalm’s owl. 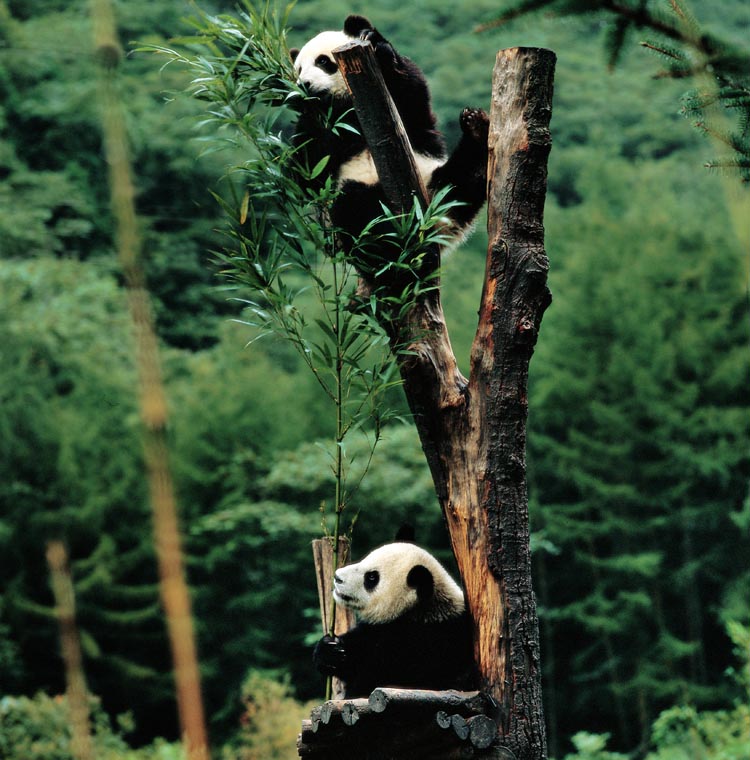 Having lived for several million years, it is one of the oldest animals of the world that survives to date. The giant panda has been adopted as the symbol for the WWF since it’s formation in 1966.

Giant pandas live in very limited areas of China and are a highly protected species. Threats faced by the giant panda include the fact that its forest habitats are fragmented and populations are small and isolated from each other, as well as poaching. Jiuzhai Valley National Park has been very successful to date in many programmes aimed at protecting the panda’s habitat, helping them to find each other through a panda corridor and eradicating poaching. 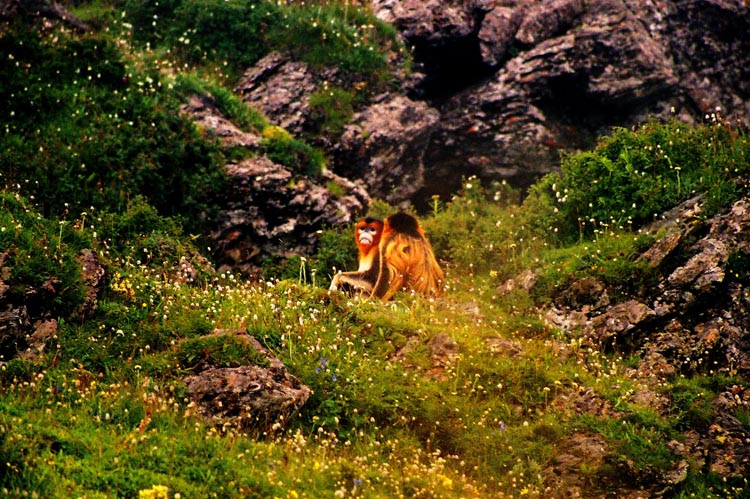 Of the three golden monkey species in the world, the Sichuan species lives in Sichuan, Shanxi, Gansu and Hubei provinces in coniferous and broad-leaf mixed forests. This agile animal belongs to the primate family, feeds on wild fruits, and lives in spruce and fir woods. A rare species endemic to China, particularly to Jiuzhai Valley, the Sichuan golden monkey is medium sized, has a blue face, brown neck, and golden body hair which is usually over 30cm in length, and has an upward pointing nose.

Sichuan golden monkeys live in groups, often dozens or even hundreds of them in each group. The head monkey leads the group and enjoys services of several of its safekeeping guards that usually stand on some high spot for vigilance. When danger approaches, the guards will send out warning cries and the group will flee to a safer place. Click here to see a group of up to two hundred captured on camera in April 2011.

Some of the park’s other inhabitants include: 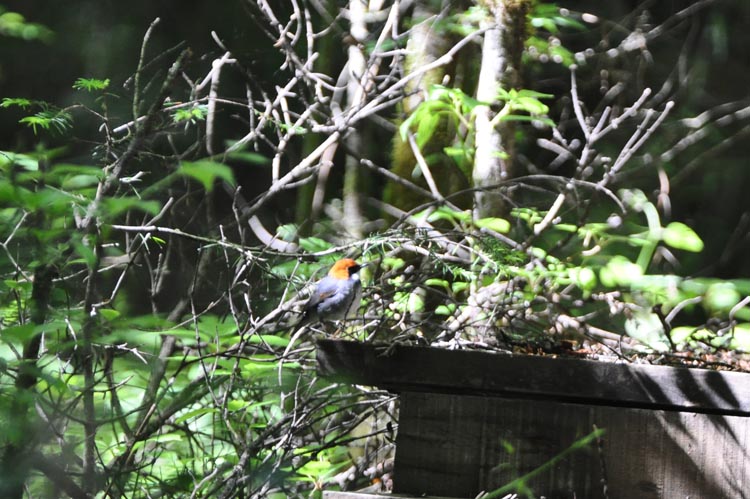 Jiuzhai Valley is home to many Chinese endemic species, many of which can also be seen further west across the Himalayas. Some of the most popular species for bird-watchers are the sooty tit, spectacled parrotbill, snowy-cheeked laughingthrush and rufous-headed robin as well as the many birds of prey including the golden eagle, kestrels etc. Many of these birds can be spotted in other areas in the Aba Prefecture close to Jiuzhai Valley. Endemic to China, they are small in size with flowery feathers, reddish brown beaks and yellow-white rings around their brown eyes. They tend to inhabit quiet places, such as the lake surface or in secluded tree holes. The male and female always stay together, hence the name “lovebirds”.

A rare pheasant species, it inhabits alpine meadow shrubs or among rocks, at an altitude between 3000 to 4000 meters. As it feeds on fritillary corms, it is called the “fritillary cock”. And, because it sometimes secretly approaches the farmhouse or hunter's tent to eat their charcoal, it is also called the “charcoal cock”. 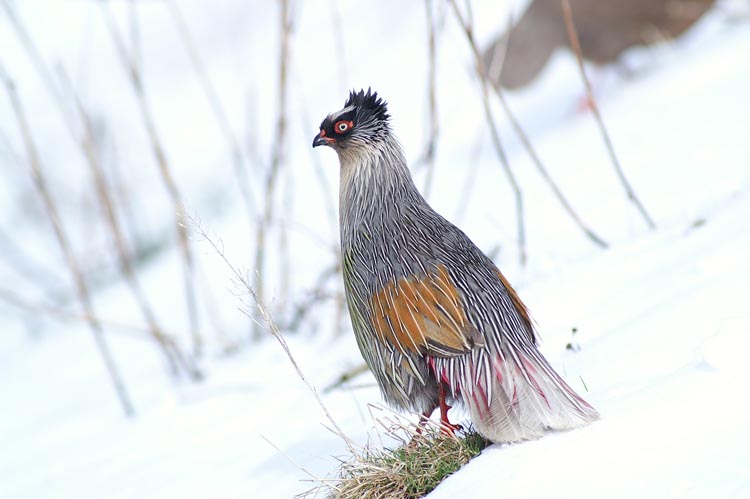 Endemic to China, it has large crown feathers dropping down to its neck. The neck feathers cover its shoulders, the colour of which changes from golden yellow to rusty red with emerald-green spots. In the heat, it erects its neck feathers into something like a fan. This pheasant can often be seen in Jiuzhai Valley. Blue and grey, it has crimson cheeks, with white feathers around the ear and the upper neck almost like the facial makeup that has been likened to that of Beijing opera! It also has a marvellous pair of lucent feathers dropping down from the neck. Endemic to China, it is a protected species, equally precious as the giant panda and golden monkey. 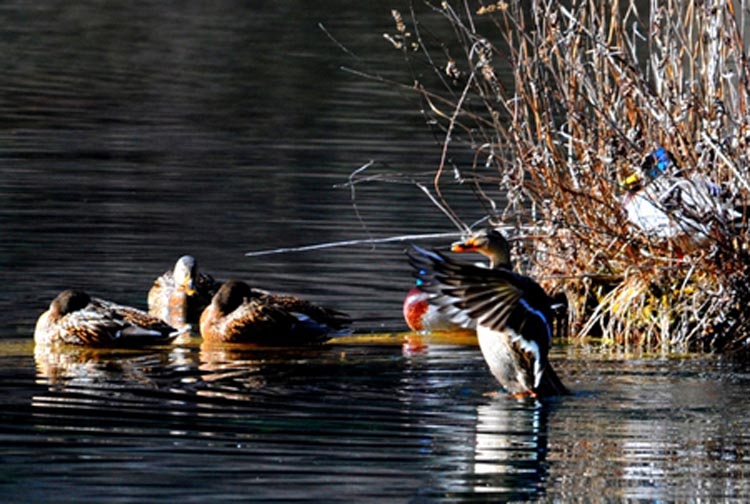 Commonly seen around Jiuzhai Valley, the mallard is a common dabbling duck which breeds throughout North America, Europe and Asia. A migratory bird of most wetlands, including parks, ponds and rivers, it nests usually on a river bank, but not always near water. It is a particularly noisey species forming large flocks. The male has a dark green head and white neck-loop. The females are light brown. It breeds in the north of China and migrates through the winter in southwest Tibet, central and southern China.

Some of the park’s other birds: Without scales, it is small in size and grows and matures slowly. This alpine cold-water fish feeds on various kinds of food. The Songpan naked carp is a lucky species regarded by the local people as the aquatic eidolon. It is a wonder that, only this naked carp, of all other fish, survives in Jiuzhai Valley. In 1983, Sichuan Bureau of Aquatic Production and Dujiangyan Administration jointly conducted an experiment in the Mirror Lake (Jing Hai). They set free 55 trout but all disappeared one year later.